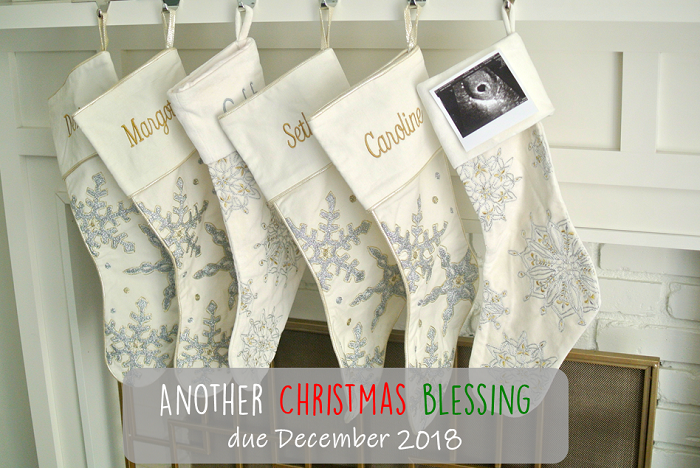 As I announced a few days ago on IG and FB, Seth and I are expecting another baby! I think pregnancy is pretty much the coolest thing ever, and of course I’m delighted to have another little miracle to love. Just as I did for my pregnancy with Caleb, I tried to jot down a few notes throughout the first trimester. As you’ll see below, this pregnancy has been very different from the first…

Week 4: With Caleb, we were lucky enough to get pregnant within the first cycle of trying. That was not the case this time around. It took us 3 cycles this time, which seemed like an eternity and a tremendous emotional struggle. I suddenly have even deeper sympathy for couples who struggle to conceive for years, not months.

Anyway, I held out on taking a home pregnancy test until about 6 days before my expected period. Seth wanted to be present, so I held my pee for the afternoon at work and took a test as soon as he got home. It appeared to be another negative, so I mumbled something about “it’s still early” and went to the kitchen to make dinner. About 5 minutes later, Seth came in and said he thought he saw a faint line. I saw something there too, but we decided not to get too excited yet. I took a test every morning that week, and the test line kept getting darker. I told my mom immediately because she had been my confidante through the trying-to-conceive process. Seth’s parents happened to be visiting that weekend so we told both sets of parents while remaining cautiously optimistic.

Week 5: The confirmation appointment with my OB is set for the 7-week mark, so now I just wait. My only symptoms thus far are fatigue, acne (?!), and breast changes. Now that I’m not a newbie I know that those boobie tingles are very similar to what it feels like when your breasts are filling up with milk.

I also went to the dentist for a routine cleaning this week, which ended up being awkward because I was due for X-rays. I told the hygienist that I was in the early stages of pregnancy (and thus could not have the X-rays done at this visit), so of course that’s all she wanted to talk about for my whole appointment. It just makes me uneasy talking about it this early and that my dentist knows before my sisters do.

Week 6: I’ve started feeling a little off in the mornings this week–not nauseated, but just feeling pretty indifferent toward food and wishing I could go back to bed. Considering the horror stories I hear about other women’s morning sickness, I’m very grateful for how relatively normal I’m feeling, all things considered.

Everything has also started tasting salty. According to Dr. Google, the shifts in hormones during pregnancy can cause dysgeusia in some women. This symptom could explain my uncharacteristic lack of appetite. Let it be known that salty coffee is pretty gross.

Week 7: This was the week of doctor’s appointments…and feeling pretty cruddy. First, we had the OB appointment–we are indeed expecting a little peanut. Things have changed even in just three years since my last pregnancy. The ultrasound room was a little fancier, and they were able to do an abdominal ultrasound at 7 weeks (last time it had to be transvaginal). The ultrasound confirmed that there’s just one baby (whew) and that it’s measuring about 2 days behind the expected due date based on my last menstrual period. So, we’re looking at an arrival somewhere between 12/28 and 12/30. Also, the heart rate was 121 BPM (I just have to document that for posterity).

I also went to the endocrinologist for a blood draw to check thyroid levels. With my last pregnancy, my levothyroxine dosage was actually reduced by about 40% (which is unusual–most hypothyroid moms have their dosage increased by about 50%). This time around, it looks like I will need slightly more; my doctor increased it by about 15%. I’ve learned that when it comes to thyroid medication, it’s basically a game of trial and error.

In other news, I’m feeling the worst I’ve felt since the pregnancy began. I’ve fallen asleep at 8pm twice in the past few days, and I’m still lethargic when I wake up. Fingers crossed that this is as bad as it gets.

Week 8: Guess what? Week 7 was not the worst of this journey, as I had hoped. This week has brought mild, all-day queasiness and flu-like malaise. My desire for coffee has dwindled to almost zero (just like my last pregnancy), so I’m also feeling tired. I’ve also begun to feel very full on not that much food. I’m a volume eater (I normally love a giant salad for lunch), so I’m struggling to adjust to the mini-meal mentality. I’ve had to lie down after dinner a few times to avoid barfing. Lovely.

I can’t decide if I’m actually sicker this pregnancy, or if I was just more distracted by classes and data collection last time. I spend a lot of time alone in my office these days, so it could be that I just have more opportunity to mope!

Week 9: We’ve made it another week, and I’m having some serious body image struggles. As with my last pregnancy, I don’t have a cute little bump to show off. Rather, my torso has “thickened” to the point where I look like a husky 14-year-old boy. Ugh. I’m not looking forward to swimsuit season AT ALL.

Fatigue and extreme appetite fluctuations continue. When will this nonsense end?

Week 10: Looking over my past few entries, I realize that I sound pretty grumpy and ungrateful. To balance all that negativity, I thought I’d come up with a few positives of pregnancy (other than, you know, the miraculous creation of life). One is that my running-related aches and pains are gone. I struggle periodically with piriformis syndrome and tight hips in general. In both pregnancies, the pain has magically disappeared. It’s amazing. I haven’t researched this phenomenon, but I imagine that my pelvic joints loosen up with the shift in hormones. I’ve been able to run pain-free for the past month or so (when I feel up to it…see weeks 7-9!).

I also feel like pregnancy gives me the “permission” I need to enjoy food a bit more and eat more intuitively. Normally, I eat pretty low-carb and thus have mentally labeled some foods as “too starchy,” but while pregnant, I try to listen to my body and eat the damn popcorn if that’s what I want.

Week 11: Another round of doctor’s appointments this week. The endocrinologist checked my thyroid hormone levels again, and everything looks fine. The baby’s thyroid is just about formed at this point, so the risks associated with too little thyroid hormone are minimized. I go back for another blood draw in two months (at which point I’ll be ~20 weeks).

I also went to the OB again this week. I got to see the baby again on the hand-held ultrasound machine (I’m sure there’s a name for it–it’s like a fancy doppler), and I was amazed at the transformation that had taken place in just 4 weeks. Our little peanut now looks like a human! The baby now has a distinguishable profile, complete with a nose (well, “nasal bridge”). Sometimes, pregnancy is the coolest. Anyway, all looks nice and normal.

I also told my adviser about the pregnancy this week. It was way more chill this time than the last, largely because we know each other a lot better now than we did three years ago. She just said congrats and the obligatory, “you look fantastic!” Just gotta get that PhD outta the way before December…

Week 12: The highlight of this week has been the first trimester screening I elected to have done. (It’s a combination of an ultrasound and blood testing to determine the risk for chromosomal abnormalities). We had a nice, long ultrasound session for the screening, and this kid doesn’t stop moving! I haven’t felt anything yet, of course, but it’s funny to see how much the baby waves its arms and legs and flips over, particularly when being bothered during an ultrasound. The measurements from the ultrasound indicated low risk, and the heart rate was 153 bpm.

Week 13: We announced our pregnancy to the rest of the world right around the 13-week mark. I’m relieved to have the secret revealed at last. We traveled up to Boston for a wedding (without Caleb), and I felt pretty great the whole time. We even walked 30,000 steps on Saturday! Two weeks ago, such constant activity would have been out of the question. Perhaps the second trimester energy boost is real after all?

I’ve been taking bump photos since week 8. In collage form, it’s difficult to read the letter board, so I’ll just tell you that the top row is weeks 8-10; the bottom row is weeks 11-13. 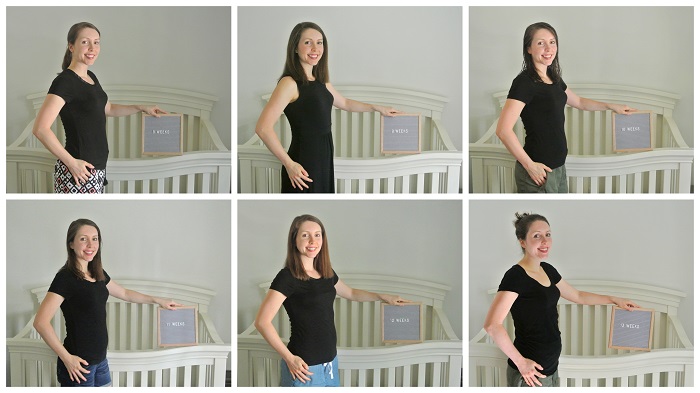 And just for giggles, here’s the progression from my first pregnancy: 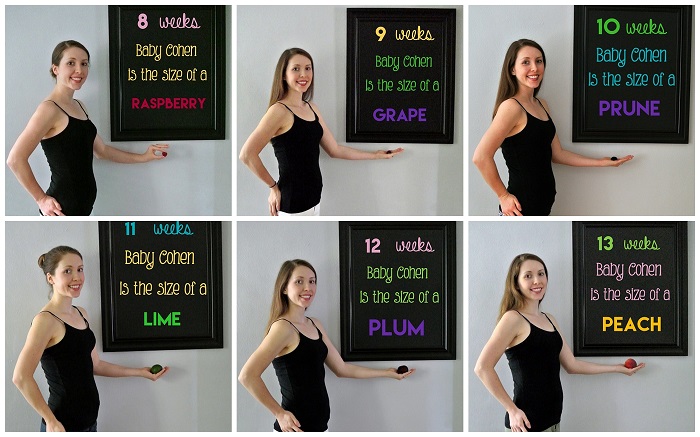 We can’t wait to begin this next chapter!

One thought on “we’re having a baby!”