It’s hard to believe, but our little nugget Nathan is already one month old! 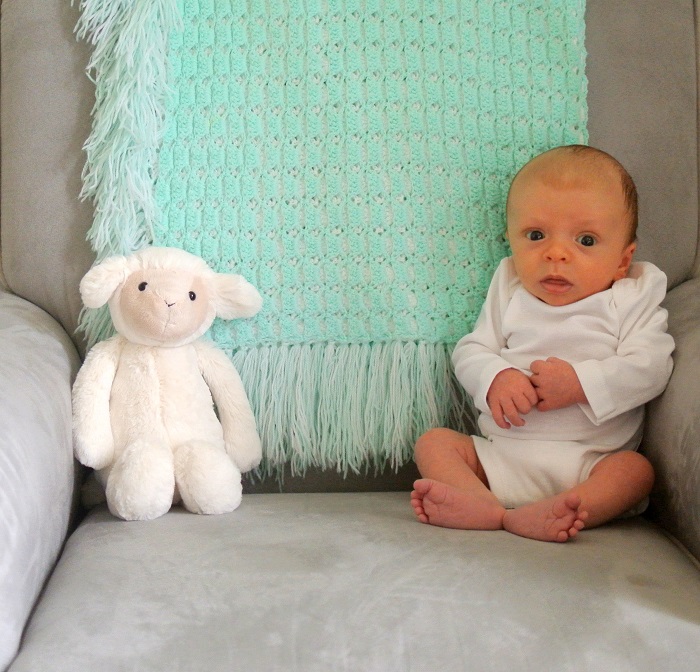 We have our pediatrician appointment later this week, so we don’t have the official growth stats. However, we still have our baby scale from when Caleb was an infant, and according to that, Nathan is already 9 pounds, 4 ounces! That brings his weight gain to two pounds in one month. He is already into 0-3 months size clothing, mostly due to length. Nathan seems much longer than his older brother was at this age; his feet are also much bigger!

Nathan’s favorite pastimes these days are watching Caleb play and gazing at himself in the mirror (ha!). I’ve also just begun singing to him in the past week or so, and he seems to enjoy that too. As for dislikes, Nathan generally doesn’t like NOT being held. We’ve been compromising and using the Ergo carrier so that I can occasionally have the use of both of my arms. He also detests the car seat, which makes running errands and dropping off Caleb at school quite the traumatizing experience for everyone involved.

First of all, this kid loves to eat. Unlike his older brother, he wakes to feed, which is actually a good thing in my mind, because this way I don’t have to make the decision of whether to wake him from a long nap to nurse him. I suspect he might have acid reflux based on his behavior after feedings (constant hiccups, arching of the back, general fussiness, etc.), so hopefully we can get that straightened out at the doctor. As you might expect for an infant this age, his sleep patterns are totally unpredictable. One night he’ll sleep for a four- to five-hour stretch, and the next he’s awake all night long. His daytime naps are equally variable. For someone who thrives on routine, this situation is difficult for me, but if I’ve learned anything about motherhood, it’s that you just gotta go with the flow sometimes.

-As you can see in the photo above, Nathan has a constant, wide-eyed expression while awake. I can’t decide if he looks more surprised or terrified.

-My mom gave us a cuddly bear suit as a baby gift a while back, and we put it on Nathan on a particularly cold evening a few weeks ago. We’ve been using it daily ever since. He loves this suit so much that you can observe a change in his demeanor as soon as we put it on him, much like a swaddle does for some babies. I’m tempted to buy one in every size!

-Nathan does not like pacifiers. We’ve tried a few different kinds, but Nathan is just not interested; he would much rather have the boob in times of distress! It would be nice to have a convenient “mute button” on occasion, but at least we won’t have to wean him off of the pacifier when he’s older.