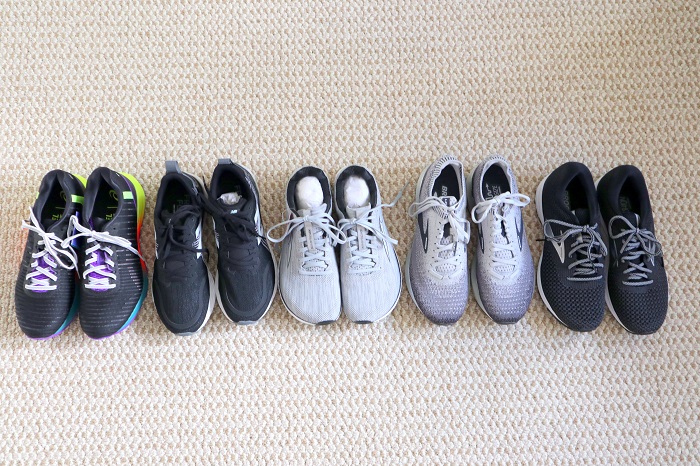 I’m a very careful shopper. I take buying decisions pretty seriously, down to the $3 box of crackers I buy for my kids’s snacks. So when my running shoes developed a hole in the toe a few weeks ago, I took on the part-time job of deciding which running shoes to try next. At first, I took the casual approach and asked for recommendations from Facebook friends. Then I looked online for reviews…which oddly all appear to be written by men. I turned to online “running shoe finders” and visited a local running shoe store (which was only semi-helpful, plus expensive and limited in sizes/colors). Ultimately, I decided to compile all this information into an experiment to be published on the blog. So here we are. I ordered 5 different pairs and then tried them on for size (and fit. and cushion, and…).

A few things I should be up-front about my unique running shoe needs:

–I don’t run that much. On any given week, I average 2-3 runs total. I’m recovering from an injury, and honestly I don’t have time for much more than that!

–I’m a flat-footed over-supinator. Generally, we flat-footed folk over-pronate (thus requiring support shoes), but I paradoxically over-supinate (meaning neutral is likely the best option). I also tend to run on the balls of my feet, so forefoot cushioning is important to me.

–I’m picky about colors. I prefer shoes that coordinate with my whole activewear wardrobe (I know, you can roll your eyes now). Black, gray, and white are my jam.

–I’ve been told to steer clear of Nikes. I showed up to my physical therapy appointments last fall in my current running shoes (Nike Air Zoom Pegasus 35) and got some serious flack for it. According to these few individuals, Nikes are all flash and no substance when it comes to running shoes, so that contributed to my decision to research a new shoe for me.

So without further ado, here are my findings: 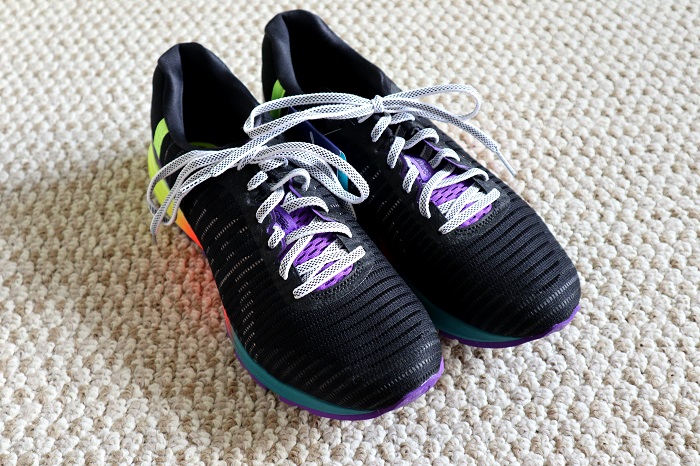 Asics DynaFlyte 3 SP, $70 (via Amazon), size 8 men’s. I used the Asics shoe finder and landed on the women’s Dynaflyte 3 but as usual didn’t love any of the colors. A little Googling and I found this spiffy men’s pair. I have normal to wide feet, so I figured some extra room across my foot wouldn’t be a bad thing. Overall, these fit my foot well and had excellent cushioning in the forefoot. I ran in Asics during my years of the most mileage (2008-2012), so I’m not surprised that I really like these! 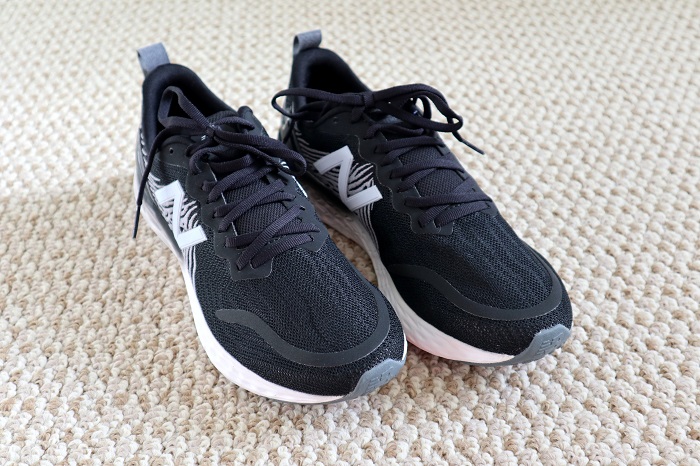 New Balance Fresh Foam Tempo, $110 (via New Balance), size 9.5 women’s. Again, I found these through the New Balance website. I’ve never worn NBs for anything but lounging, but of all the neutral options on their website, I liked the look of these. These felt good on–very lightweight. Unfortunately, there was not enough cushion in the forefoot for me. I was afraid I’d be hurting after anything longer than 4 miles. These were also the most expensive pair of shoes I tried this round. 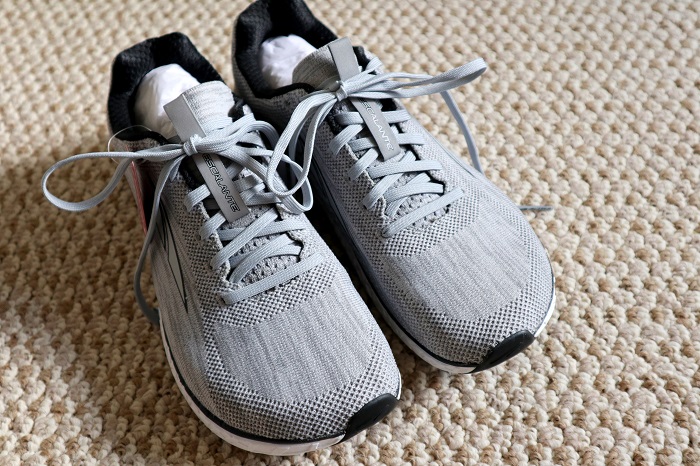 Altra Escalante 1.5, $89 (via 6pm.com), size 9 women’s. Altra is a new-to-me brand, recommended by my brother-in-law, who admittedly probably prefers a more minimalist shoe than I do. What drew me to these is the larger toe-box (hence the semi-dorky duck-foot shape). I like letting my toes have room to groove in any pair of shoes I own, but particularly in running shoes. All the reviews indicated that I could order my usual shoe size (and not go up the standard half-size for running shoes), so that’s why I ordered the 9. Unfortunately, these felt too short on me. These were also quite lightweight and didn’t have a ton of cushion overall, but I think I might have given them a chance had they fit in terms of length. 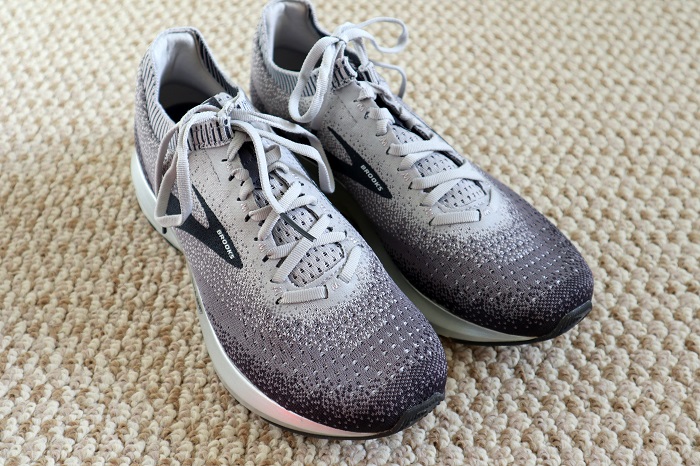 Brooks Levitate 2, $90 (via Brooks), size 9.5 women’s. When I polled my friends for running shoes, several recommended Brooks as a brand. I have never run in Brooks shoes, so I decided to try a couple models. The Levitate 3 is one I tried on in person at a local running store and liked it, although the salesman mentioned that the heavy-knit sock fit can be really hot and sweaty in the summer months. These felt quite big and bulky on my foot; I probably could have sized down to a 9. I might return to this model in the future. 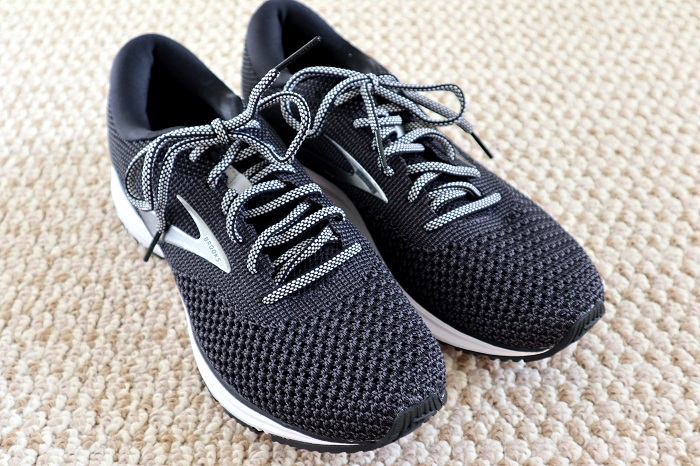 Brooks Revel 2, $65 (via Brooks), size 9.5 women’s. This was a model recommended to me by the Brooks shoe finder. Well. technically, the Revel 3 was recommended…but it was $100 instead of $65. These were OK shoes. They honestly felt a lot like the Nike Zoom Air Pegasus in terms of cushioning and the breathable knit material. I was tempted to keep these as a back-up choice since they were so inexpensive, but ultimately I decided to send them back. I also could have gone down to a 9 in these.

So, after likely hours and hours of research, I’m going to give the Asics DynaFlytes a try. I’ll wear them outside for the first time tomorrow (weather permitting!). Fingers crossed I like them…and that Asics continues to make them for a while!