It’s been a while since I last updated you on things I’ve cooked and liked (TICAL). Between transitioning to a new schedule and trying out State of Slim, I haven’t had as much opportunity to be creative in the kitchen, but I did manage to snap a few pictures of the more interesting fare:

Making this “sauce” (more like a dip in this case) was actually not my idea–my dad suggested I make it as an appetizer for the Mother’s Day celebration at their house. I had never made anything that involved soaking cashews before, so I was game for something new. This was long enough ago that I don’t recall the exact blend of herbs I used, but I’m guessing it was a combination of sweet basil and Thai basil from my dad’s garden (no cilantro though–Mom is an avid cilantro-hater!). I made a double-batch, but it wasn’t as much of a hit as I would have hoped, so there were LOTS of leftovers. Whomp, whomp. The kids were big fans of the breadsticks though. At least Seth and I liked it!

One good thing about State of Slim is that it encouraged me to try new protein options. I tend to make salmon over and over again, but I saw mahi mahi on the “approved” food list and decided to try cooking with that for a change. On this occasion, I made a sort of deconstructed fish taco by serving the mahi mahi with lettuce, sauteed peppers + onions, low-carb tortilla, and fresh-made guac. It was pretty awesome. I just wish I had some of Seth’s homemade pineapple salsa too!

Egg Roll in a Bowl 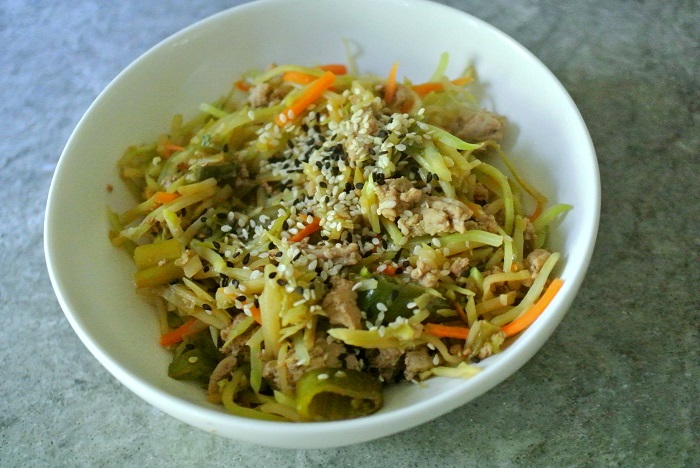 If you search Pinterest for “egg roll in a bowl,” you’ll likely get hundreds of results…some are healthier than others. This version from my faves, The Real Food RDs, is pretty nutritious and darn tasty. I’ve made it several times now with ground turkey breast, but I’d like to try it with lean ground pork. It’s also fun to get creative with toppings. I kept it simple here with black and white sesame seeds, but on other occasions I’ve also used roasted cashews (so good!), sriracha, spicy mustard, cilantro, and scallions.

It must be summertime if I’m busting out the gazpacho for dinner. It was the perfect use for our surplus cucumbers from the CSA share. I published Dad’s gazpacho recipe on the old Broccoli Hut site many moons ago, but perhaps I’ll get around to posting it here in the near future. To be honest, there’s no real science to it–just throw some fire-roasted tomatoes in a bowl with olive oil, vinegar, and your favorite veggies.

I originally had planned on making something like these burgers, but as it turns out, I had neither spinach nor Parmesan. Hm. So I improvised with some extra basil, parsley, and feta instead. I wished I had used an egg as a binder as Kris did, as they were a little dry, but they were decently tasty. I served them on some mixed greens with sauteed mushrooms + onions, plus a little marinara for dipping.

What have you been cooking lately?