It’s the official first day of summer, and our CSA “spring season” share has come to an end. This is our last box, and the last CSA haul I’ll share for a while, although I think we’ll extend our CSA through the summer. I plan on putting together a post in the future detailing all the ways I’ve incorporated the Snow’s Bend Farm produce into my cooking. Anyway, here’s what was in box #11: 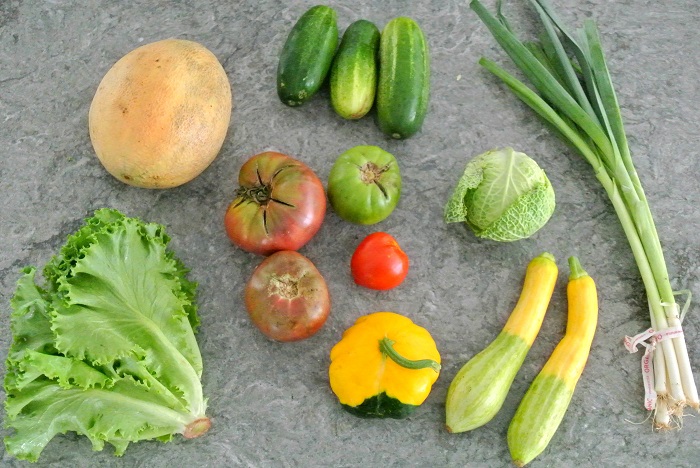 The noob this week is the cantaloupe. Fortunately, Caleb has just discovered the joys of summer melon, and he will undoubtedly help me eat this. It’s much easier for him to eat cantaloupe than to pronounce it, ha!

I’m pretty sure this head of cabbage is the tiniest one I’ve ever seen–it almost looks like an overgrown brussels sprout. Fortunately, we still haven’t used the head from last week’s box, so I’ll probably combine them to make a classic cole slaw with mayo, Dijon, Greek yogurt, and a touch of honey. It was a big hit the last time I made it.

The CSA newsletter said that leeks would be included in this week’s box, but what I received really looks like scallions. I have some leftover cilantro, so I’m thinking zoodles with Asian turkey meatballs is going on the menu next week.

We have a bunch of cucumber again (not that I’m complaining), and I’m planning on using it to make this recipe. I made it sometime last year and really loved the “Greek salsa” component!