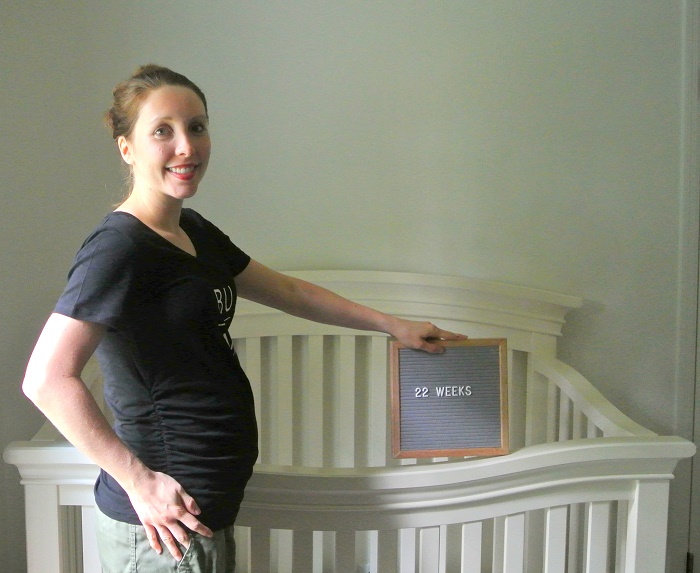 Week 22: Welp, the stereotypical pregnancy symptoms hit me like a ton of bricks this week. To be more specific, both my appetite and my emotions are out of control. First, the appetite. Up until this point, my hunger level hasn’t been all that different from normal (although it was definitely blunted at times during the first trimester), but now I feel a bit like a bottomless pit. In fact, when I made my lunch on Sunday, it ended up being such a massive plate of food that I was slightly embarrassed and tried to eat it in the kitchen so that Seth wouldn’t see the size of my feast. (He walked in and did indeed comment on my mondo meal). As for my mood, I just seem to be crying at the drop of a hat these days. Typically, I would say I have a good cry session maybe once every three months? (I don’t know, it’s not something I typically quantify…but let’s say crying is relatively rare for me). But I think I’ve cried about 4 times in the past week, over everything from post-graduation plans to a photo of a newborn Caleb.

I also had a doctor’s appointment at the tail end of this week. It was the kind of appointment I like–super quick and easy. We started measuring my belly, and–no surprise–I’m a tracking a little ahead of schedule. My blood pressure was the lowest I can ever remember it being, but my OB assured me that hypotension is not something to be concerned about in pregnancy. We also listened to Baby C, and while his constant acrobatics made it difficult to listen to his heartbeat for very long, it seems to be holding steady at about 140 BPM.

Week 23: This week has been a busy one, and as a result I haven’t had much time to contemplate my pregnancy. That being said, two things come to mind when I reflect on the past week. First is that Caleb started at a new school this week, and the plan is for Baby C to enroll there in the spring. Unfortunately, saying goodbye on Caleb’s first day was quite difficult–he was very nervous and cried when I left. I bawled in the car…and once I got home…and a little at work. Nothing prepares you for feeling your child’s pain (physical or emotional) so intensely, particularly in this case, because I know I would be feeling the exact same way if I were in that situation–and I’m 30 years old!  I’m about to cry now just thinking about it (see Week 22…).  All this has me wondering how I will ever be able to bear that kind of emotional burden for TWO children.

The only other remarkable thing about this week is the amount of activity going on in my uterus. I thought Caleb was an active fetus, but this kid takes it to a new level. Pretty much all day, every day he is kickboxing my insides. It makes me fear for the third trimester when he’s a lot bigger and stronger. Fingers crossed that he doesn’t break one of my ribs before December.