A few weeks ago, I read in our weekly church newsletter that they had partnered with a local farm to be a pick-up location for CSA boxes. (CSA = Community Supported Agriculture; learn more here). I’ve been wanting to participate in a CSA for about the past decade, but I’ve never gotten my act together enough to actually do so. I’ve loved seeing all the great produce that Elise brings home from her family’s CSA share each week, so I discussed it with Seth and we’re trying it out for ourselves for the April-July season. To say that I’m excited about it would be a serious understatement. It’s probably not normal how much local and organic produce excites me, but alas, we all know I’m a nutrition nerd to the core.

Anyway, I thought it might be fun to share what’s in our box each week, along with a few recipe ideas on how to use the produce. So without further ado, here’s the haul from week 1:

Does anyone really need ideas on how to eat strawberries? We’ll probably eat most of these as is (and likely in less than 24 hours…). That being said, I have been wanting to try making whipped cream out of coconut milk, and strawberries + cream sounds pretty fantastic right about now. 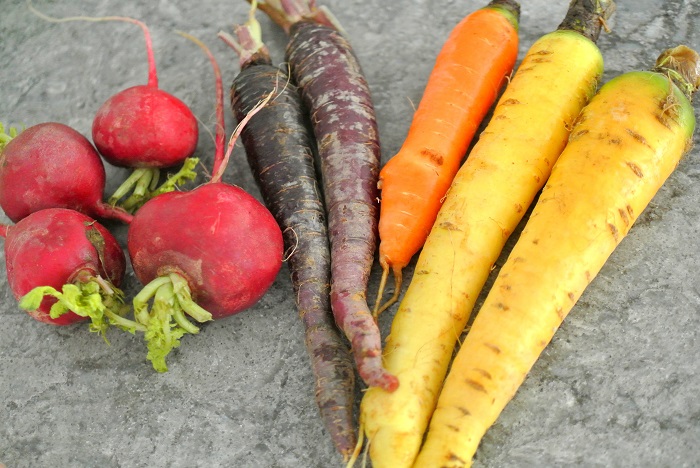 Radishes are a bit more challenging, as this is a vegetable with which I don’t have much experience. I’ve tried roasting them before with mixed results, but I’ve seen some recipes for radish “chips” that could be interesting. Or, I’ll just eat them raw with guac or hummus. Ditto for the carrots.

I love chard, but I almost never buy it. Chard is always a good addition to soups/stews or sauteed up as a side, but I’ve seen some recipes floating around Pinterest that use the leaves as wraps (like this).

As for the leeks and parsley, I think I’ll use those in a crustless quiche like this one from The Real Food RDs.

I’ll be sure to report back on any winners, but please drop any recipe suggestions in the comments below!